Free Shipping on orders over $99. This offer is valid on all our store items.
Search
Recent Posts
Trending Article
The Beginner’s Guide to Maserati Watch 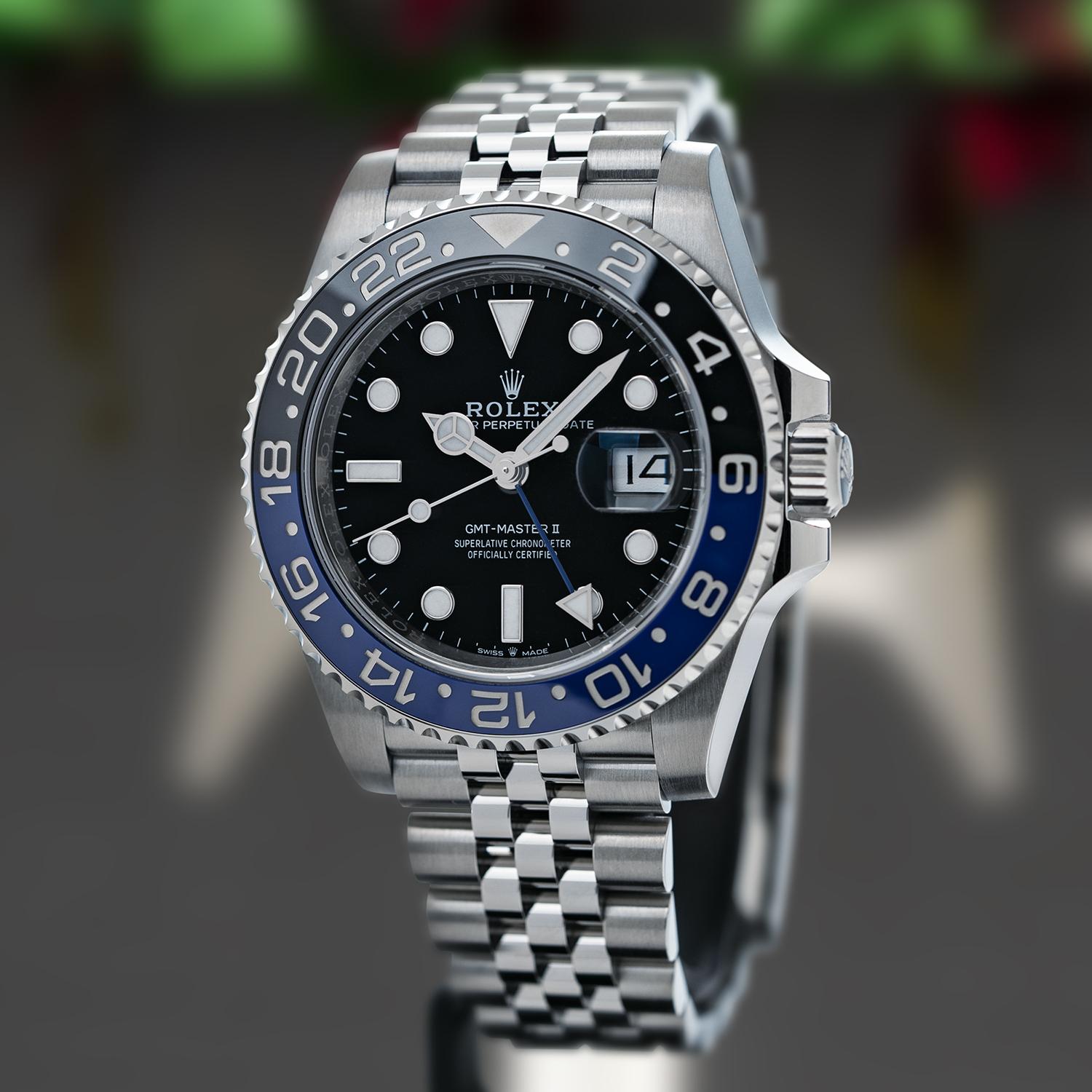 In the Rolex GMT-Master II collection, the name of “Rolex Batman” should be a familiar name to you. In 2013 Rolex introduced the GMT-Master II 116710BLNR in Baselworld. Featuring the iconic black and blue Cerachrom bezel, it got a heroic nickname the same as the dark knight.

Compared with decades of history of GMT Master, the Rolex GMT Master II Batman watch is a young member among its other fellows such as the Rolex Pepsi models and Rolex Coke. Yet it received overwhelming responses from the market since its launch.

In 2019 Rolex discontinued the popular 116710BLNR Batman and replaced it with the new 126710BLNR Batman. It raised massive discussions among the Rolex lovers at the time on its technical updates and changes on the look.

Both of the Batman Rolex watches are considered as one of the important milestones of the whole Rolex GMT Master collection. Let’s take a closer look at these Rolex GMT Batman watches and see if we can decide which one is better.

As the little brother of GMT Master, the first GMT Master II 16710 was introduced in 1983. It was the first Rolex GMT watch featuring a sapphire crystal and equipped with the Rolex Cyclops magnification lens placed above its date window.

However, all of these Cerachrom bezels were in black until the introduction of the Rolex GMT Master II Batman 116710 BLNR.

Rolex released the GMT Master Batman at 2013 Baselworld. Before its launch, Rolex has already declared that making a two-tone Ceramic bezel might be impossible. The launch is a solid proof that Rolex had overcome the technical difficulties and created this stunning watch.

As we can see from the model number, the watch itself is built off from the previous model GMT Master II 116710. The BL stands for ‘Bleu’ and the NR stands for Noir, which means blue and black in French. The Rolex Batman watch featured a blue and black Cerachrom bezel. The 24-hour marker on that dual-toned bezel allowed the wearer to differentiate between day and night hours in the second time zone.

As the first watch featuring a two-tone Cerachrom bezel, it instantly became one of the hottest Rolex watches in the market.

After its discontinuation in 2019, this value of watch even became higher. The demand for it never ceased because it is the last steel GMT Master II model featuring both Cerachrom bezel and an Oyster bracelet.

Six years after the launch of the first Rolex Batman 116710BLNR, Rolex released an upgrade version in 2019. It is called the new Batman or Batgirl in order to distinguish between the two watches.

We can find a number of upgrades in the new models and the most obvious change is the stainless steel Jubilee bracelet. It even started a huge debate among the Batman admirers.

While some people welcomed the change since the outlook has become more elegant, many others still favored the Oyster bracelet on the old version. They prefer the Rolex GMT watch to keep its sportiness as a professional sports collection.

The new Rolex Batman has actually undergone some noticeable improvements beyond the new Jubilee bracelet. Let’s take a deeper look on the comparison of the two Rolex Batman watches.

From the outlook the Rolex 116710BLNR and 126710BLNR look almost identical. As mentioned, the most obvious difference is their bracelet.

The original Batman 116710BLNR features a steel Oyster bracelet, like the other Rolex sports watches such as the Rolex Daytona or the Rolex Submariner.

The new 126710BLNR, however, comes with the classic 5-link Rolex Jubilee bracelet. On top of the elegant bracelet, it pairs with a solid folding buckle with Oysterlock and a 5mm Easylink extension.

The Jubilee bracelet is more likely to be found on dress watch collections like the Rolex Datejust. That’s why some Rolex enthusiasts do not welcome this change on a Rolex sport watch. However it is not possible to switch between the two kinds of bracelets, those people would favour the old Batman over the new one.

The case of the new Rolex Batman remains the same 40mm in diameter and 12.5mm thick just as the same.

Yet despite the same diameter, GMT Master 116710BLNR is thicker and angular on its shape. The Rolex 126710BLNR is a bit thinner and more rounded for a more refined feel on the wrist.

The new GMT Master Batman 216710BLNR houses the new in-house caliber 3285 movement. It was a delightful improvement over the previous 3186 movement in the 116710BLNR.

The caliber 3186 in 116710BLNR offered 50-hour power reserve while the new 3285 movement improved it up to 70 hours. The calibre 3285 offers a more efficient escapement and kit train and a brand new variable-inertia balance wheel. The movement is certified Superlative Chronometer and provides a 5-year warranty.

Which Should You Buy?

When we see the specifics, the new Rolex GMT Master II Batman 126710BLNR is indeed technically superior to its predecessor 116710BLNR. It comes with a more refined case, slimmer lugs and better movement overall.

On the other hand, the old Batman 116710BLNR is still very popular due to its significance and sporty look. It was the first Rolex watch featuring a bi-colour ceramic bezel. It was also the first to have a blue and black bezel. Besides, with its short production for only a few years, it is valuable on the secondary market. To buy a reasonably-priced Rolex Batman Singapore will be one of the best regions.

Most importantly for some Rolex enthusiasts, they prefer the old batman which features the Oyster bracelet better.

So, if you are those who admire Rolex history or like the classic Rolex sporty look, 116710BLNR will be the watch for you. If you’re the one who wants the most advanced model from Rolex, then the new 126710BLNR is the better choice.

Founded by Guccio Gucci in 1921, the Florence-based luxury-fashion company has been renowned worldwide for its magnificent handbags, clothing lines, lifestyle accessories, watches, jewellery and footwear. Gucci is the first Italian haute couture label to venture into luxury watchmaking. Since the early 1970s, the Florentine house has been designing, developing and manufacturing luxurious wristwatches. Now […]

It has been over 70 years since Rolex Explorer made its debut. It is known as one of the Rolex professional watches that everyone might have once seen.  Since the 1930s with its patented Rolex Oyster Perpetual had been developing its professional series of watches each by each. For example, Rolex Explorer, Rolex Submariner, Rolex […]